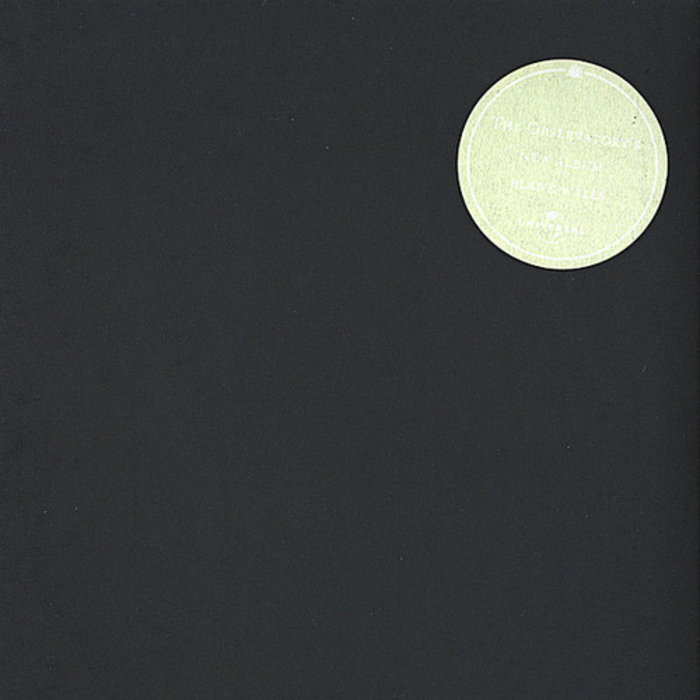 Since The Observatory's debut 'Time of Rebirth', released in March 2004, a quiet, ruminating album of poignant songs underlined by delicate textures and subtle electronic elements, the band has continued to pursue its philosophy of perpetual change, reinforcing their belief that music should always be a transforming experience.

Blank Walls continues the group's experimentation with song form, creating depths of unrelenting tension. Hovering just below the surface is an unmistakable menace signalling a mood-shift towards a more palpable intensity, also evident in the subject matter that explore various themes of displacement, from anger to disenchantment, from the quaint and humorous to self-mockery and plain indignation.

This limited edition comes in a surprise special packaging for the first press.

QUOTES FROM THE PRESS
'Throughout, the audacity can be heard in the way sounds are spliced, unwound and transplanted without warning. Indeed sonic blitzkrieg alternated with gauzy weightlessness for a disorienting but euphoric feel. Perhaps that is why The Observatory fascinates. Evocative without being explicit, its accessibility lies precisely in the distilled blankness of its music, a clean slate where all can project their own hopes and fears... the whole thing spells magic. Yet, it is all the beauty of (meta)physics, the simplicity of science married with, yes, brilliant imagination.'
— Yeow Kai Chai, The Straits Times

'Like its predecessor, Blank Walls surrounds you with an elaborate soundscape; layered but hardly dense, dissonant but hardly discordant.'
— Felix Cheong, Today

'This album is a beautifully crafted opus ... While most Singapore acts happily crank out fuzzy guitar rock (with the rest belting out cover tunes), The Observatory is an anomaly. In fact, it was quite astonishing how the band could combine so many music genres - using everything from banks of guitars, laptops, keyboards, recorders, xylophones and other gadgets to drive home their musical point.'
— Zul Othman, Weekend Today

'... a variety of subtle underlying impressions ranging from awe-inspiring mystery and wonder to disturbing dread and fear. The introduction of dissonance -- as featured in songs like "Olives" and "My Whole Life", especially in the controlled chaotic climax of "A Good Thing", perhaps the most significant and engaging elements to distinguish this latest offering from their somewhat more harmonious debut.'
— Ivan Thomasz, MTV Asia

The Observatory’s music is texturally complex and viscerally emotional, crossing wasted borders and musical extremities that parallel polarities within human existence, provoking and inspiring in a deeply enigmatic way. The group draws inspiration from their Southeast Asian roots and heroes of new music and art. ... more

Bandcamp Daily  your guide to the world of Bandcamp

Khruangbin and Greg Foat stop by with their amazing new LPs.